Sometimes it feels like we are nothing more than our afflictions. Our struggles begin to define us and we feel completely alone in them. Our thoughts get the best of us and we think things will never get better. May we never stop fighting our way through the thoughts that crowd our minds in order to reach out and touch the hem of the One who calls us, "Daughter".
You are loved! You are accepted! He is here for us in our loneliness and our afflictions.  <3 div=""> 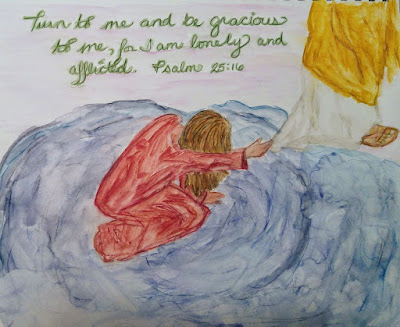 It didn’t seem to matter what she did. She had tried every doctor, every wives tale, and every well meaning piece of advice people had given her over the years. None of them worked or helped her situation. In fact all her efforts had done nothing more than to make her more lonely, dejected, and desolate than she was before. The “cure-alls” hadn’t cured her and she had nowhere left to turn.

“Un-clean” they called her. Just a pious word for dirty. She became her filth, her shame, because that is all people were able to see when they looked at her. People had stopped offering her advice let alone friendship long ago. Apparently afflictions out last people’s patience and hers had been going on for twelve years. Cast out. Un-wanted. She lived most of her days trying to stay as far away from the whispers and the stares as she could.

One day she overheard talk of a man who could heal with just his presence. A great man. People were hoping to just get a chance to be within ear shot of him.

“Perhaps,” she stopped herself mid thought. Dare she even allow herself the smallest inkling of hope that maybe this time…. She sat at war with herself wondering if she should risk it. More stories of this man and his miracles passed by her until the hope inside of her grew stronger than her fear that this too would end in disappointment. She had to at least try to see this man, this healer, that so many had spoken of.

She stole her way through town, trying her best to remain unnoticed. The crowds were large. Everyone was looking for this, Jesus. Suddenly fingers started pointing. “There he is! Look over there!” She saw the man they were all searching for. Her heart leapt inside of her, surely if any man could take away her suffering it was this man. She inched her way closer squeezing herself between bodies and under arms until she was down on all fours crawling her way through the teeming crowds of people.

Her mind raced. “Who do you think you are that he should heal you? Are you not a filthy, shameful thing? Turn back before you embarrass yourself, or worse, are turned away. Again.” The hope inside of her would not allow itself to be silenced by the fear. “If ever a man could take this affliction from you, it has to be him. His face, his eyes, didn’t you see the power in them? It is better to leave defeated than to not even try, no matter the risk. “

Before she knew it this man Jesus was passing by her. Here was her chance! Down on all fours, head not daring to look up, she reached out and touched the hem of his garment. It would have to be enough to save her. Just a touch of him had to be all she needed. And it was. She felt it immediately. He did too, because he stopped and turned. He asked who had touched him. The crowds went silent. No one came forward. He asked again who had touched him. With a quivering lip and heart she confessed telling him her entire story as all eyes and ears in the crowd were on her. Would he take back her healing? Would he also cast her out? He did neither of those things instead he did the most amazing thing, the last thing she ever expected. He called her, “Daughter!" Not only was she healed, she was accepted!

Jesus said, “Daughter, you took a risk trusting me, and now you’re healed and whole. Live well, live blessed!” Luke 8:48 MSG
Posted by Karmen M. at 2:03 AM No comments:

Some Posts that Others Liked